As we mentioned in our last entry, it’s always windy in Wyoming. Every day is a battle against the wind, and if we are lucky it’s only at a speed of 25-35mph. Some days, like today, gusts reach 60-80mph.

The locals know this force of nature well, but still prefer it over still air as that is when the mosquitos eat everyone alive. We also have personal experience with this. On one lunch break, Kelly was bitten at least 11 times. Needless to say, Wyoming has not been the most enjoyable state to cycle in.

We left Jeffrey City early Thursday morning after being up half the night from the howling wind. We set off with the wind on our faces, determined to endure the hardships of the open road. We kept our breaks short, only stopping to re-apply sunscreen and refuel our bodies. 10 hours and 58 miles later, we finally made it into Lander. Exhausted from a long day we were unwilling to go any farther to scope out the numerous available campgrounds so we headed across the street from our meeting place to The Sleeping Bear campground, which was decent but unspectacular. We quickly ate dinner and went to bed before sunset.

The days of riding through Wyoming have not been without beauty, but the landscape is not nearly as interesting a other places we have been. Plus, the wind forces our heads down with the effort and an attempt to be more aerodynamic so we haven’t spent much time admiring our surroundings. Far from the blood red canyons of Utah and the densely forested mountains of Colorado, Wyoming thus far has been pretty flat, sand-colored, and agricultural with mountains in the distance. We have largely been passing by large ranches populated by stoic cows, disinterested sheep, and friendly horses that move closer to us as we pass by. Once, Mi paused to change music and looked up to be greeted by a dozen curious painted horses lining the roadside gate.

We have seen scores of pronghorn antelope dotting the plains and sprinting away when we get close. These tawny creatures, the same sandy color of the grass they nibble, are the fastest north American animals reaching speeds upwards of 60 miles per hour. Kelly also saw a moose that turned tail as she approached and moved faster than one would expect of these ungainly-looking animals.

From Lander we set off again on HWY 287, otherwise known as the Chief Washakie Trail. After a few miles we entered the Wind River Reservation which appeared very different from other reservations we have traveled through, at least cosmetically. Unfortunately, the other reservations have contained dilapidated houses and roadsides littered with countless discarded beer bottles. The Wind River Reservation, however, looked pretty much the same as the surrounding towns with ranches and the like.

The similarity between this particular reservation and the surrounding areas may be because of the relationship between Chief Washakie and the American government during western expansion. Chief Washakie, from the Shoshone tribe (the same tribe that Sacajawea was from), was adamant about maintaining peace with white emigrants and explorers. At one point, surrounding tribes declared war on the whites and asked for Washakie’s help. Instead of helping, he and his tribe joined forces with the US military and wiped out the opposing tribes.

In Washakie’s younger days, he was a mighty warrior who led his tribe into battle against the Crow tribe over hunting rights. When the Shoshone tribe won, a ceremonial celebration took place, where Washakie danced holding the heart of a Crow warrior. This is how the town Crowheart received its name.

After cycling about 47 miles we reached the little town of Crowheart where we were told by multiple people that we could camp at the firehouse. Glad to be sheltered from the wind we set up camp, made and devoured a huge dinner of pasta and vegetables and hit the hay. As our luck would have it, our slumber was quickly interrupted. Before long, the cows in the field next to where we camped started groaning and baying. They literally sounded as if they were giving birth or something of the sort. Maybe they were upset about the furious winds that blew all night and into the next morning.

The moment we left Crowheart the wind was blowing furiously. Generally we wake up and hit the road early in an effort to avoid the wind that kicks up in the afternoons. In Wyoming, though, the wind starts early and only gets worse as the day drags on, with only brief moments of delicious stillness. Thankfully our ride from Crowheart was fewer miles than the previous three days so we only had to go about 35 miles to get to Dubois. We have been through a few towns named by French explorers and chuckled at their bastardized American pronunciations and this town is no different: locals pronounce it Doo-boys. The wind was particularly bad and made our progress agonizingly slow. Kelly made it to Dubois in five hours- about half an hour before Mi, who struggled valiantly forward for 25 miles before gratefully accepting a lift from a couple who found this sad little cyclist pouting by the side of the road.

By this time, Kelly had price-checked all the accommodations and found the KOA campground to be the cheapest. In our experience, KOAs are generally overpriced and cheesy with little as far as amenities so we tend to avoid them. This one is surprisingly well-equipped, though still overpriced for camping. There is a pool, laundry room, showers, store, a friendly dog named Bell that takes stuffed animals off the store shelves to give to anyone who gives her attention as gifts, and riverside camp spots. Since we got to town fairly early in the day we had time to explore a bit.

Dubois is quaint with its rustic wooden sidewalks, saloons with names like The Outlaw, and an exhibit at the gas station dedicated to the fabled Jackalope. The backdrop of this town is the Fitzpatrick Wilderness, which Kelly has been pointing out at every opportunity. She likes to think that Thomas Fitzpatrick, the explorer for whom the area is named, was a distant relative and that he passed the wanderlust down to her.

We decided that this was a good place to wait out the impending rain that we suspected would hamper our ability to climb over the pass. Besides, ten miles before reaching Crowheart we met another cyclist heading in the opposite direction who said that he was forced to wait until the road reopened after a snowstorm so we wanted to wait for a clear day to attempt the climb. Plus, after cycling 200 miles in 4 days we decided that we needed a break so we spent today relaxing, doing puzzles in the campground’s laundry room, and hanging out with Henry, who caught up with us early this afternoon. We are finding that after cycling more than 2,200 miles we are tired and very saddlesore so we spend our rest days doing as little as possible.

At this point we are about 50 miles from Teton National Forest and less than 100 miles from Yellowstone, our next major destination. Yay!

Although the wind is fierce and against us, at least the topography has been mostly manageable with rolling hills. This actually makes the weather all the more frustrating because we have to pedal just as furiously to maintain our downhill speed as on the flats. Our tallest climb in the state will be tomorrow when we go up over Togwotee pass which exceeds 9,650 feet.

With the wind howling so consistently we haven’t needed to wait long for the dark clouds and rain to blow right over us. During the more inclement times the wind is exponentially more fierce, but it has been our experience thus far that these periods are relatively short lived and before long the sky has cleared and the wind slows somewhat.

Well, now we’re off to finish getting ready for tomorrow’s ride and make it an early night so we can hit the road early. Thanks for the ongoing support and readership. Buenas noches! 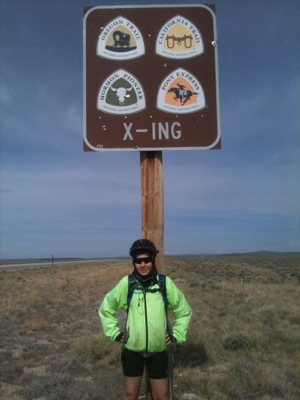 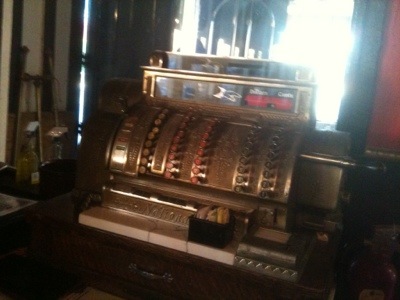 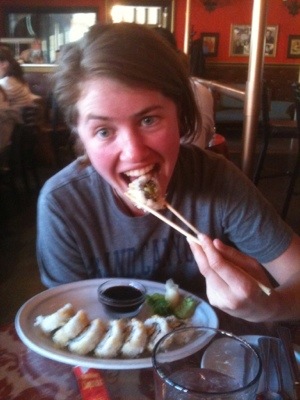 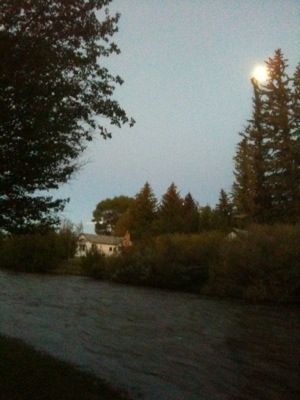 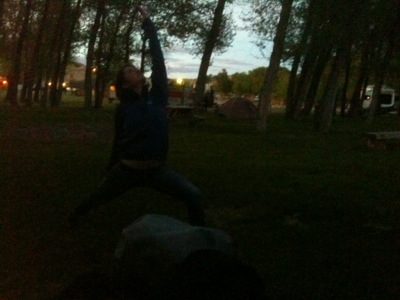 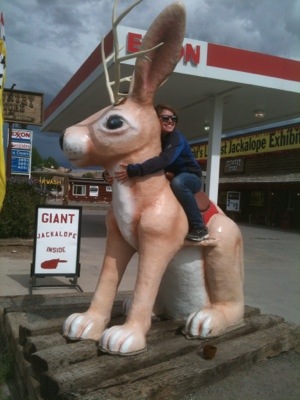 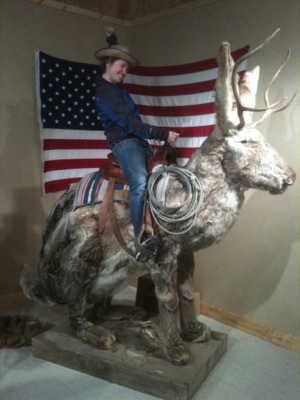