This morning we left the apartment at 5:30 to go to Shoshone Point to watch the sunrise at 6. Geoff took us on the 20 minute car ride to where he and Janice were married four years prior. Upon arrival it was obvious why they chose this location. The view was absolutely stunning. Although the temperature was barely above freezing, and snow was all around, we stayed there for almost an hour taking it all in. 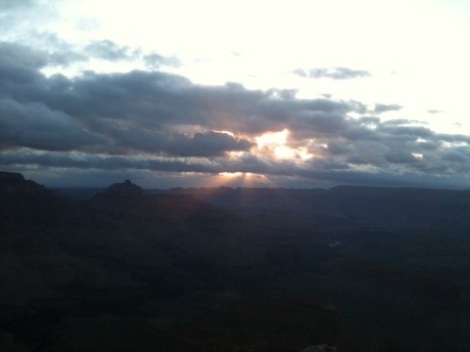 When we first arrived, the sky was already brightening through the ominous-looking snow clouds. The three of us walked a short distance to the point where we climbed onto a rocky outcrop to take in the wakening canyon. Before long, the sun began to peak out from behind the clouds. The quiet, crisp morning had an ethereal quality that was heightened by the godlike rays slicing through the clouds like a spotlight from on high. As the canyon yawned before us into wakefulness a pair of ravens played on the icy wind before perching on a pinnacle behind us. According to Geoff, ravens mate for life. This symbolic omen and the intimate grandeur of this secluded spot got us thinking about our own future and the possibility of following in Geoff and Janice’s footsteps down the isle here. 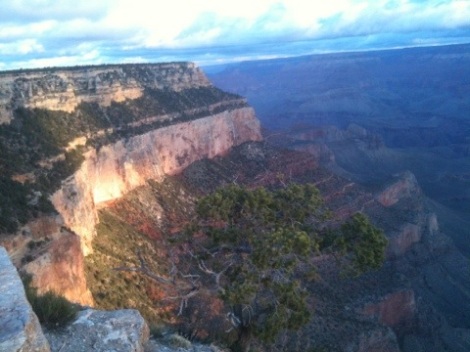 We spent about an hour huddled on this exposed outcrop watching the light fill the canyon down to the Colorado River far below, learning the geological strata from Geoff via a fun mnemonic device (see photo below), and scanning the many crevasses for signs of condors.

According to Janice, who is a wildlife biologist who generally studies mammals but has lately been thrown into the realm of birds due to a shortage of staff, told us this morning that there are only 79 condors in the area and that they are still critically endangered, despite their supposed resurgence from the brink. Before conservation efforts began in the late 1980s there were only 14 condors left in the world. Now there are about 300 of these huge, not that cute but still impressive, birds ranging from Northern Arizona and Southern Utah to Southern California but they are still far from saved. Besides habitat destruction and poaching, a major cause of their decline and continued threat comes from lead poisoning. Lead is still a common ingredient in hunting bullets and when hunters take down an animal they typically leave behind something unappetizingly called a gut pile. The remaining entrails are lunch to a hungry condor but there is still enough lead in the offal that many birds die from digesting it. There are efforts to educate hunters and exchange their ammunition but the process is slow and has met much resistance from people who refuse to be regulated. 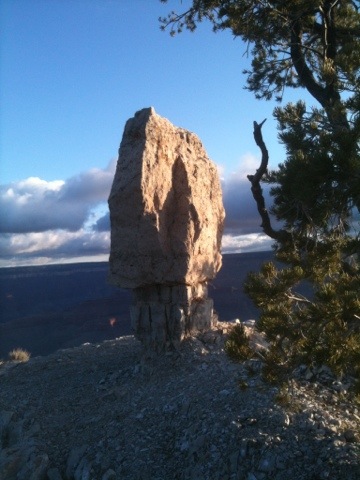 Unfortunately, it has been a bad few months for condors, with high numbers of fatalitites. When Janice came back to the apartment, she mentioned that yet another condor had been found dead and will be brought back to the Park for a necropsy. This was a captive bred bird that had been tagged and died outside the Park. Despite this disappointing news, we hope these birds, with their wrinkled bald heads and impressive nine-foot wingspan, the largest of all north American avians, will once again soar unimpeded above this fabled landscape. 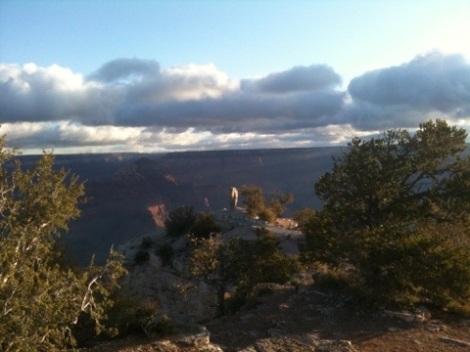 We are leaving the Canyon tomorrow and hope to be in Utah in the next 5-7 days. The forecast says to expect 3-5 inches of snow this evening. If this occurs, Geoff has agreed to drop us off in Desert View 25 miles away so we can begin our decent back into the desert where we will be safe from snow and have temperatures 10-15 degrees warmer than at the Canyon. 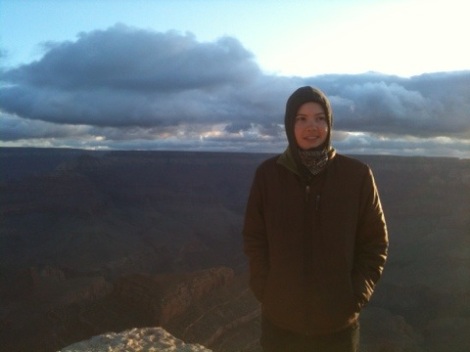 To show our appreciation for our hosts’ incredible generosity we are making them a sushi dinner. Funnily enough, in the midst of the preparations Janice came back to the apartment and announced that we had been invited to a sushi party by some other residents of the Park. We’re excited to mingle with some of the other park employees including park rangers and others concerned with the conservation of the diverse plants and wildlife here. 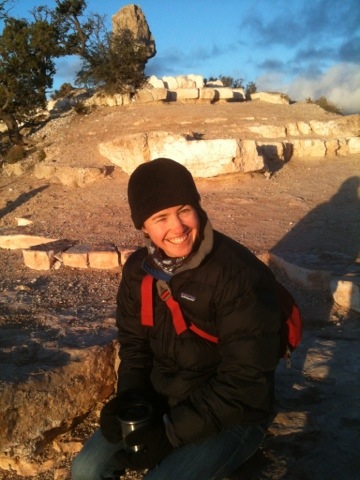 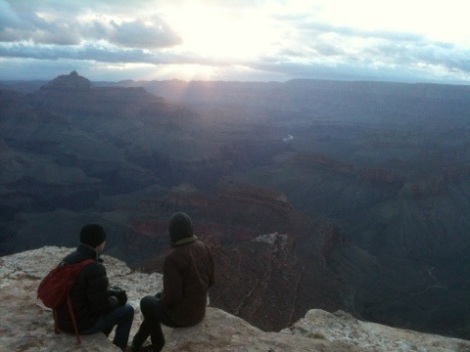 So with that we will sign off to go stuff ourselves and then make it an early night so we can be up before the sun so we can head out on the next leg of this incredible adventure. Cheers!

3 responses to “Sunrise Overlooking the Canyon” 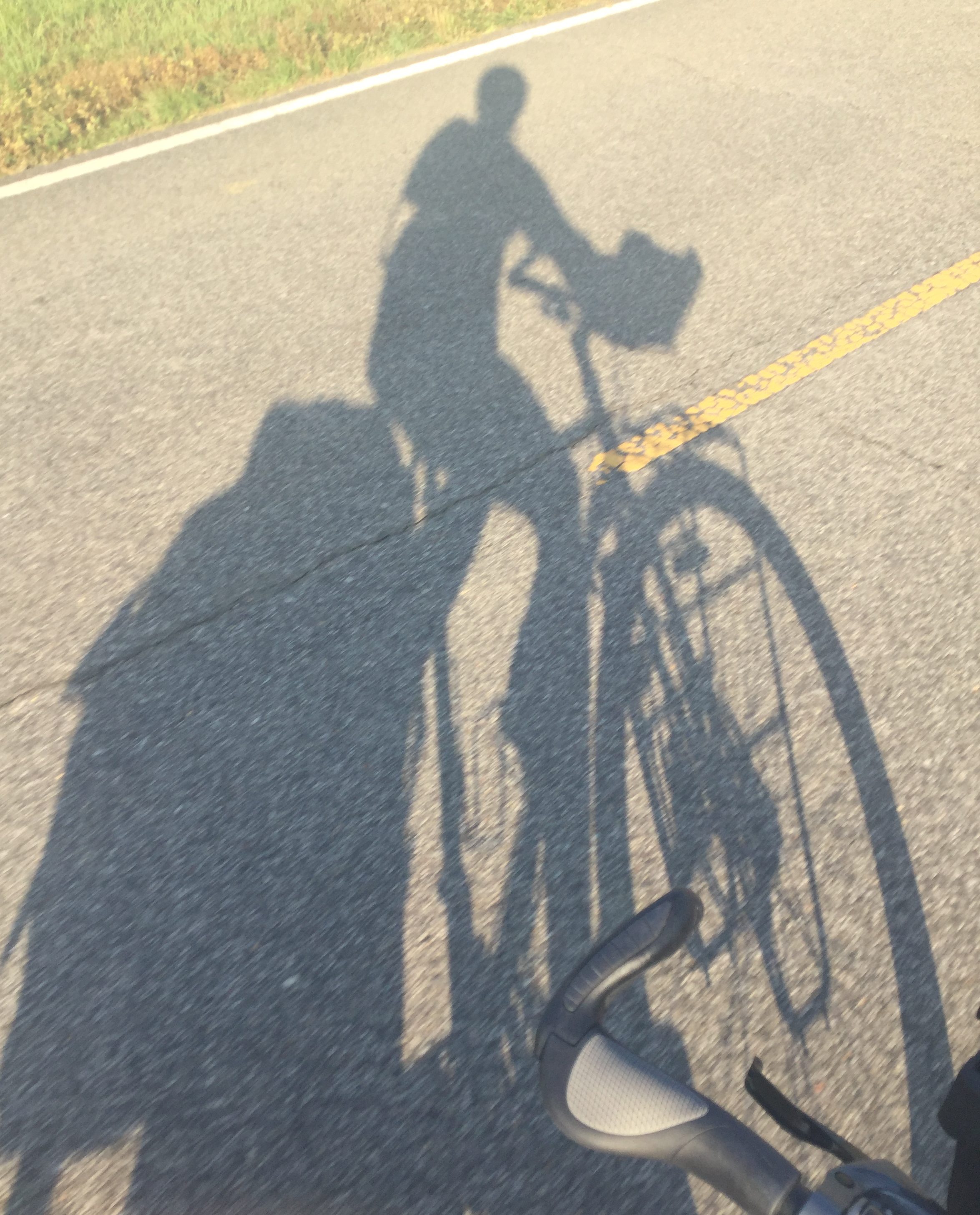