For Kelly’s birthday,  Stephen and Gerd took us on a tour to visit some of the calendar-worthy landscapes that make Norway famous. Our first stop was a lake near Vossavangen. We climbed down a small embankment to the lake shore where we found what appeared to be discarded farm equipment, a wooden box containing more than twenty traditional spade-shaped slate roofing tiles, and other detritus. As you can see from this picture, this lake is similar to many in Norway, reflecting the mountains in its mirror-like surface. 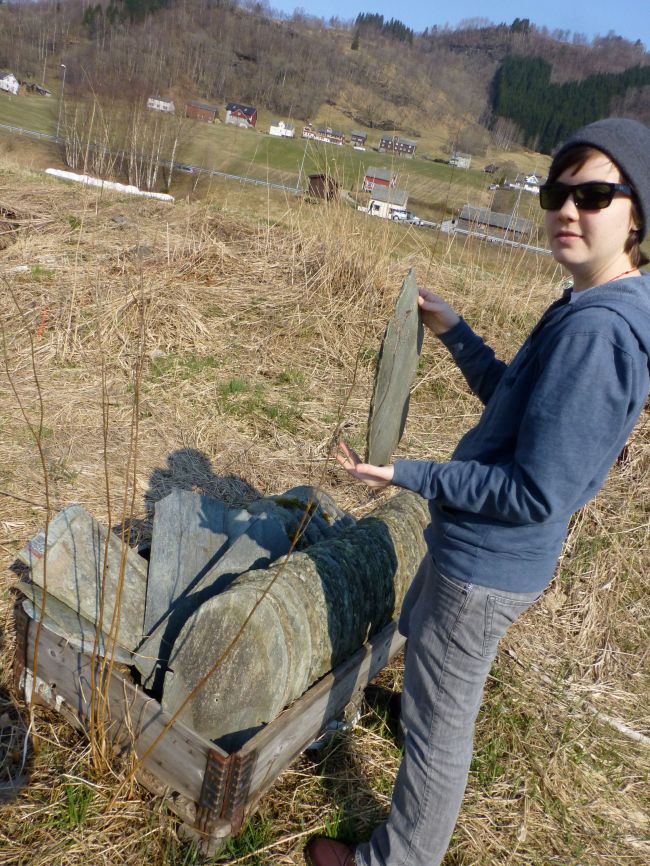 Kelly kept comparing this view with that of what you may find in very diffucult jigsaw puzzles. Kelly loves puzzles and hopes to one day make one with the picture above. 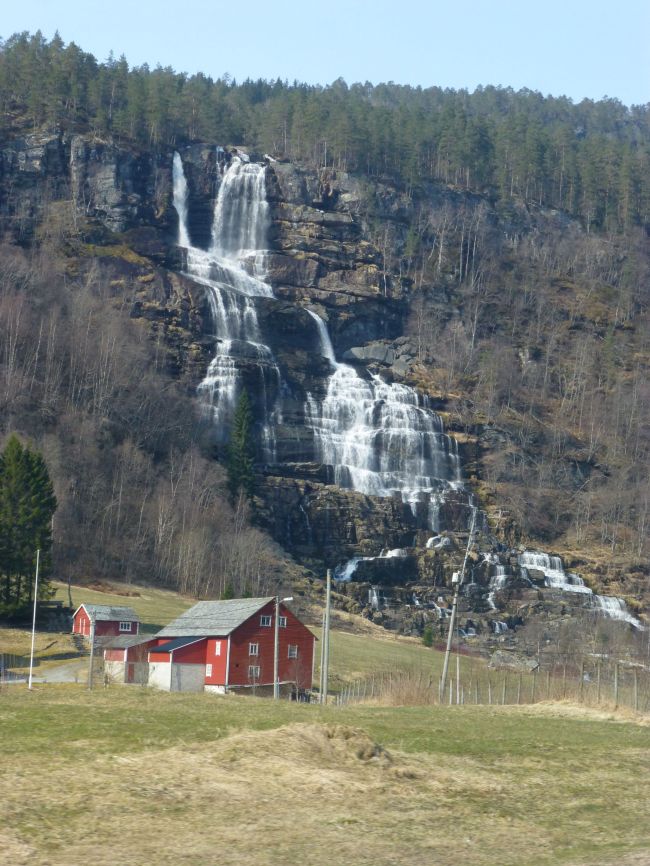 As we drove on toward  Sognefjord, we lost count of the number of waterfalls that we saw bringing snowmelt down from the mountains. Stephen estimated that there were hundreds and probably thousands on the road to Oslo.

Being the end of March, there was still snow on the ground and ice covered many of the lakes. 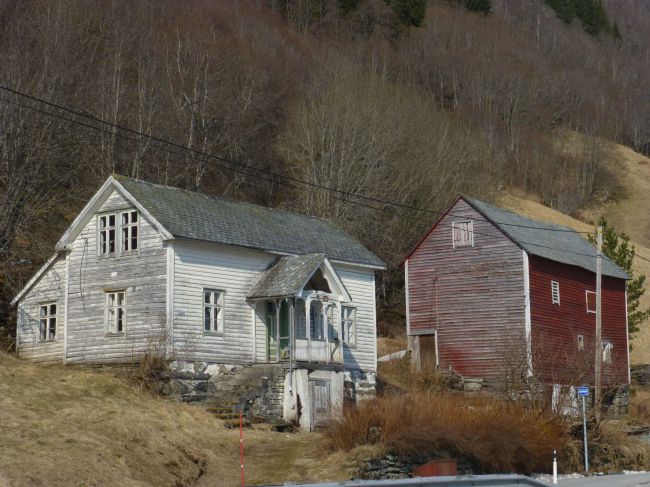 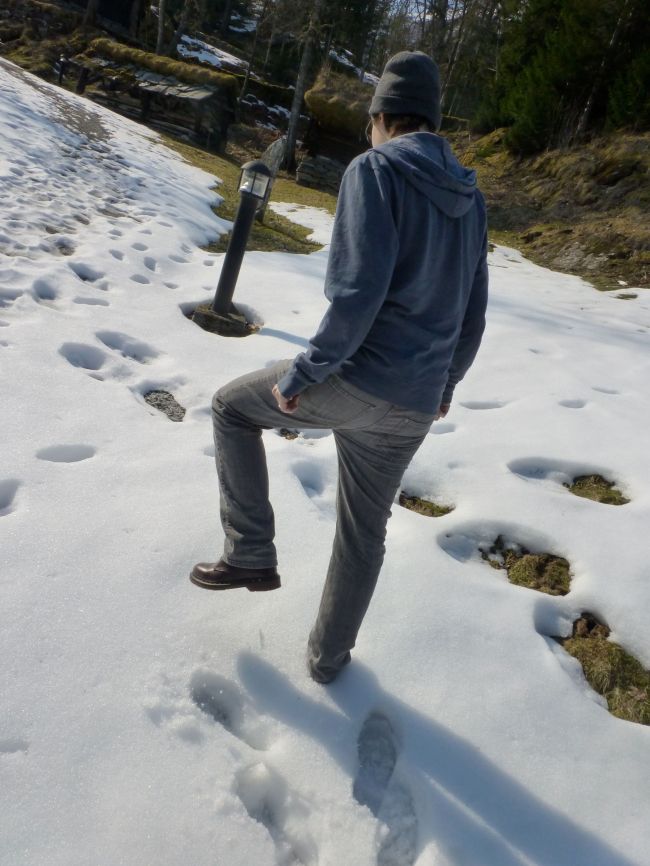 One of our stops was at the Stalheim Hotel, which offers terrific views of the fjord. We had originally planned to have a snack and a cup of tea in the hotel restaurant but were sadly dissapointed to learn it was still too early in the season. Stephen and Gerd suggested that we still have a look around while they wait in the car.

Across the street from the hotel is the Stalheim Folk Museum, which we checked out first. It was the off season so the museum buildings were closed but it is an open air museum which allowed us to trudge through the snow to admire the farm buildings representing daily life in the late middle ages.

The schoolhouse represents a period a bit later in history and its walls were covered with maps and interesting illustrations of local fauna. 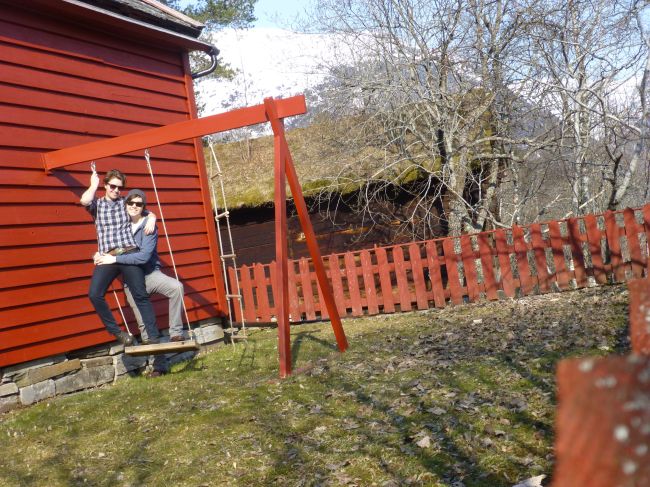 Behind the schoolhouse we found the swingset and took a break from sightseeing to play. 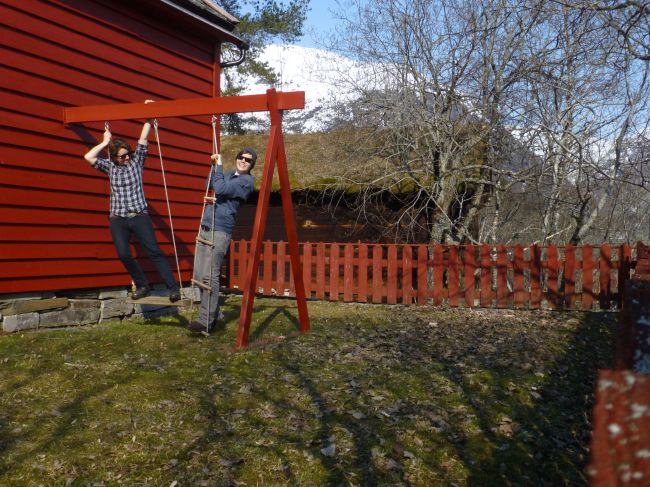 This tiny structure is an outhouse, where a person could relieve themself in style and with company. We can only imagine how cold and chapped the little bottoms of the school children must have been during bathroom breaks. 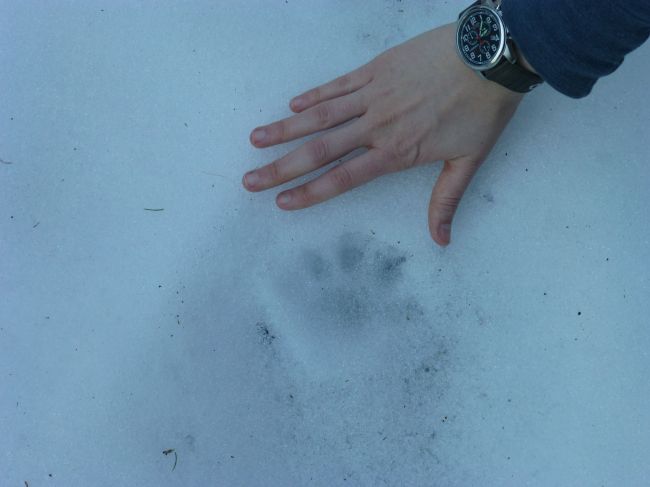 When we were on vacation in Bali, we walked into a shop to buy water and found two women doing yoga poses on the cashier’s counter. They were remarking about how posing on the beach was too cliche, so they were trying to find more interesting places. Milo thought a moss-covered rock, shrouded in snow, overlooking a fjord-fed river was a pretty interesting place to strike a pose. Kelly decided to attempt the dangerous task. Once she looked at the picture, she realized just how dangerous it really was to balance on the slippery rock. 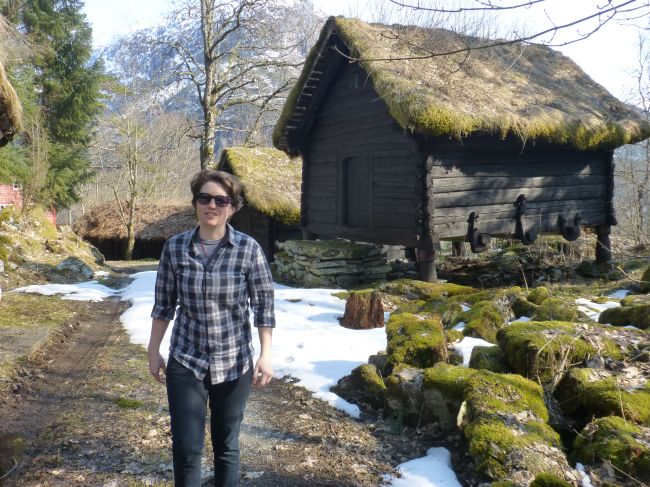 Many of the structures were built on stilts, which Stephen told us later was to keep the rats and critters out of the food stores and the warm, reindeer pelt beds. 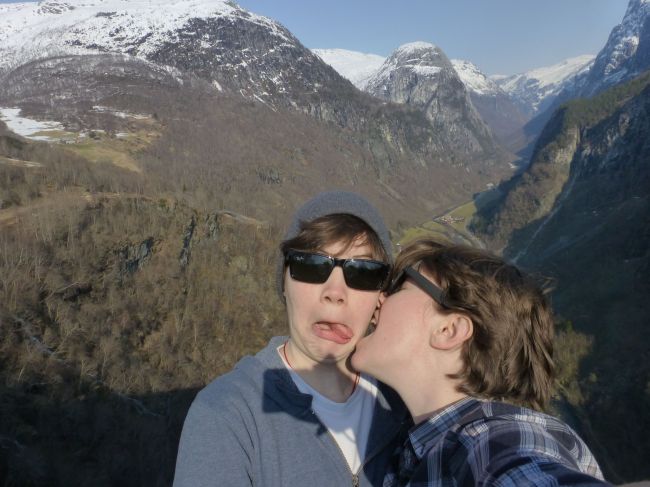 Although the hotel, which was originally opened in 1885, was closed for the season, we couldn’t resist trying to make our way around the building to take a look at the stunning view Stephen and Gerd had taken us all this way to see. Fortunately, we were able to follow a narrow path and nimbly scramble up the rock strewn, muddy slope to the back patio of the hotel. Once we had brushed the mud off our hands, we recovered from our slippery climb,  took in the breathtaking view, and snapped a few sappy pictures. 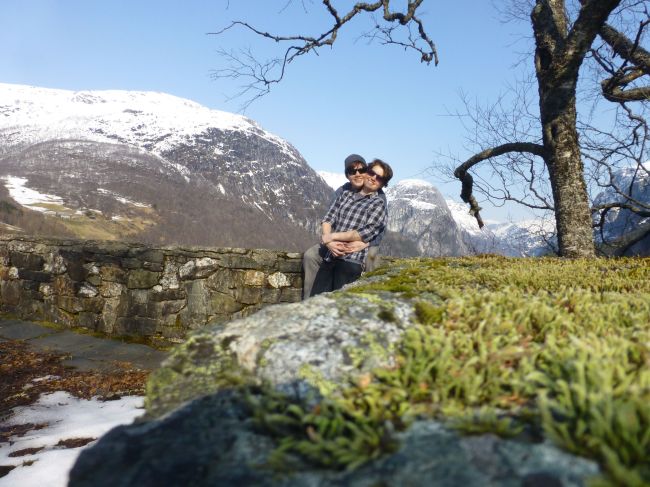 Mi has a special fondness for moss, especially when it covers the ground in a comfortable mat. We previously learned from a movement called Earthing, that touching the earth for at least 10 minutes a day can relieve stress, rebalance equilibriums and pull toxins from one’s body. One doesn’t need to be naked, but simply walking with rubber soles does not complete the desired effect. It can, however, be accomplished through many materials such as cotton and linen.

Moss covered the roof and walls of a WWII-era bunker, which provided a sniper view of the Naeroy Valley. Beyond the bunker is the Nærøyfjord, which is a narrow branch of the large (204 km!), ‘king of fjords,’ Sognefjord and was listed as a UNESCO World Heritage site in 2005. Its name originates from Nyord, who was the Norse god of seafarers and the sea. According to the National Geographic Traveler Destination Scorecard, Norway’s western fjords, including Nærøyfjord, rank as number one!

After a while of taking pictures, admiring the view, and checking out the hotel’s famous terrace garden, we made our way back down to the road. We had to find an alternative route back to the road, as the way we ascended to the viewpoint was too steep to decend. We zig-zagged down the hill and found ourselves in a large field of snow. Of course, we couldn’t simply trudge back through the snow without throwing a few snowballs. Kelly has killer aim. 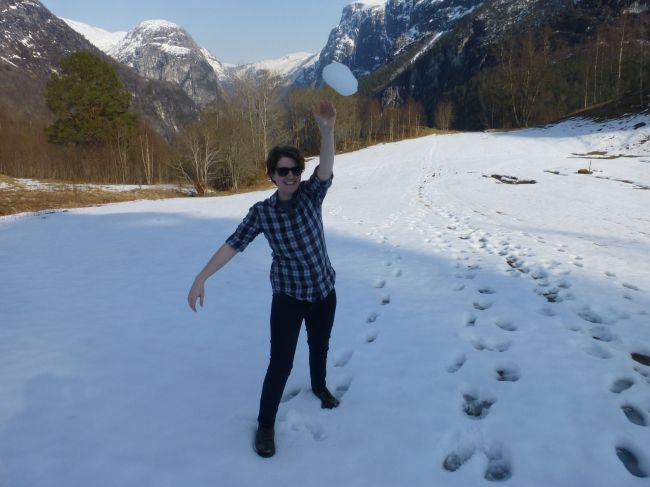 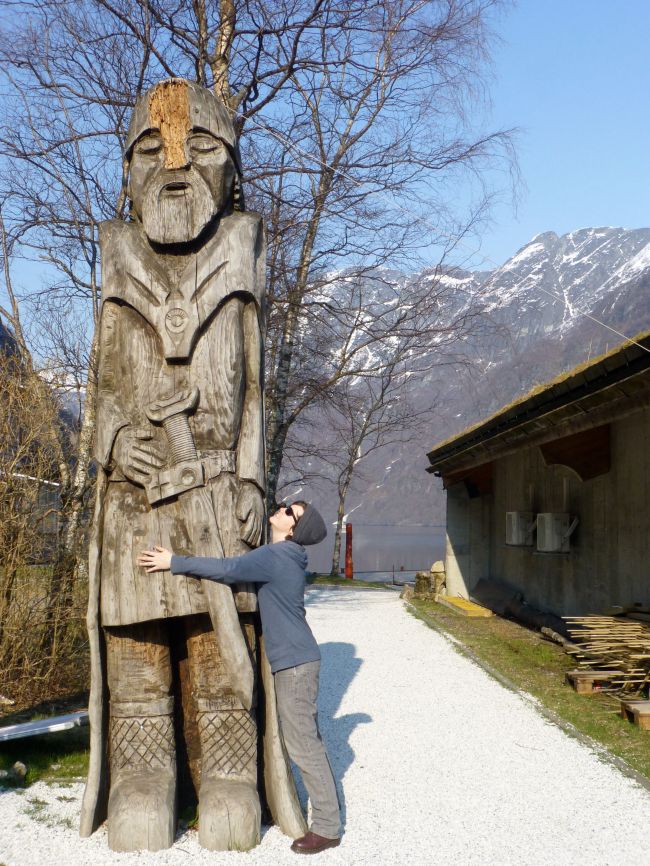 On our way to Flåm, we stopped at the  Gudvangen Fjordtell visitor center in Aurland, where ferries leave to tour the Sogn area and fjords. Although the center was closed, we took time to let the resident vikings feel the love. 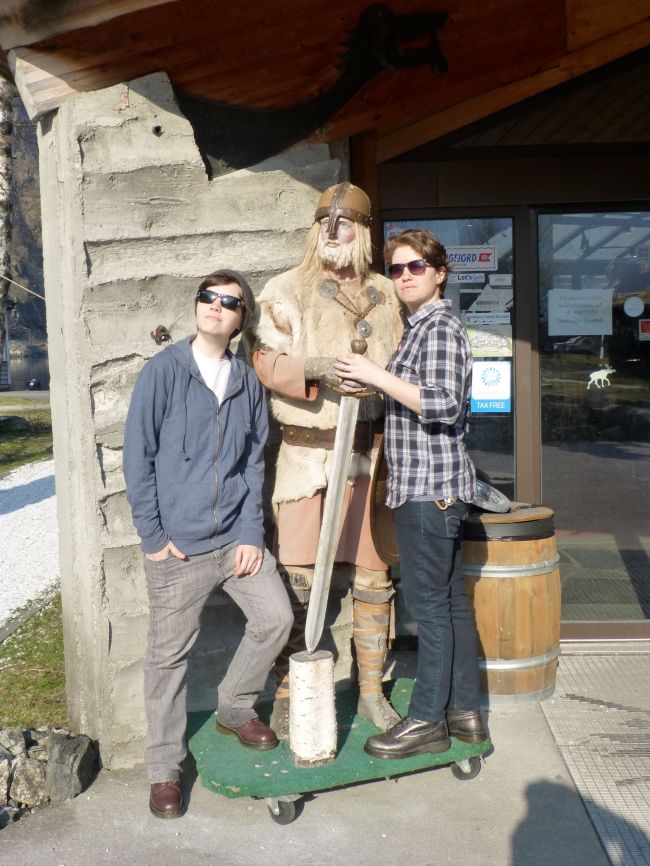 We stopped in Flåm, which means flat, plain piece of land, for coffee and a quick picnic. Before the trip, Stephen and Gerd made their snack and we made ours. Coincidentally, when we all pulled out our lunch, we had prepared the same egg salad sandwiches.

The day turned hazy as we made our way toward the viewpoint over Aurland Fjord at Stegastein, stopping periodically to admire the scenery. 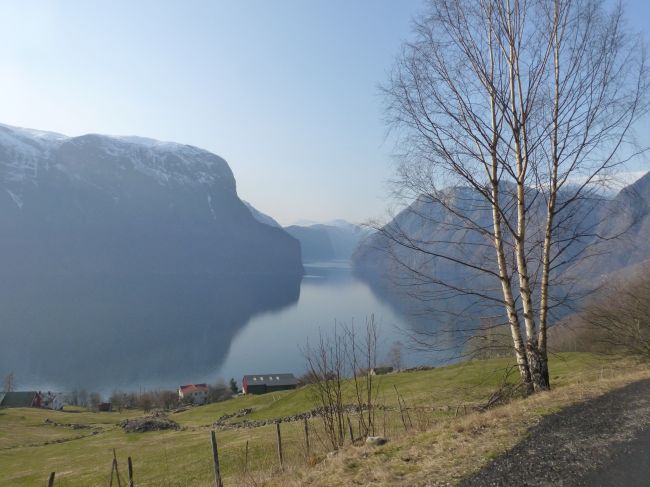 On our way up the mountain to the viewpoint we were charmed by this older gentleman cyclist, pedling like a champ. Though there were no signs, we estimate the incline to be between 4-8% 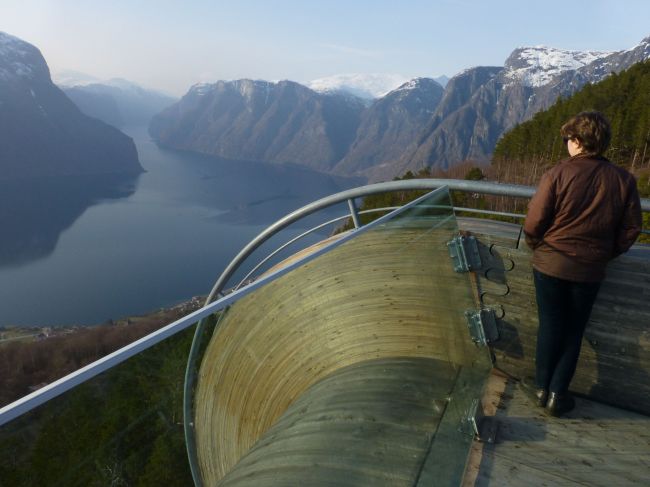 The Stegastein viewpoint is one of Norway’s most famous tourist attractions as the curved wooden platform juts 640 meters into the air above Aurlandsvagen. 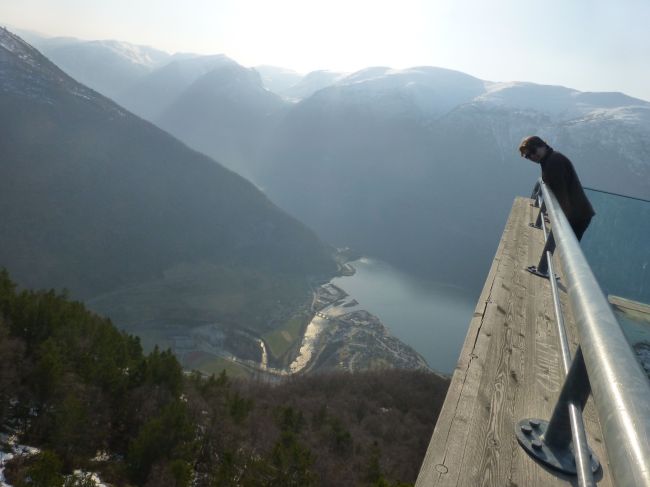 Milo wanted to get a picture of all the colors of moss, but Kelly just wanted to hold hands with the photographer’s shadow.

Jumping off a bench into the snow! 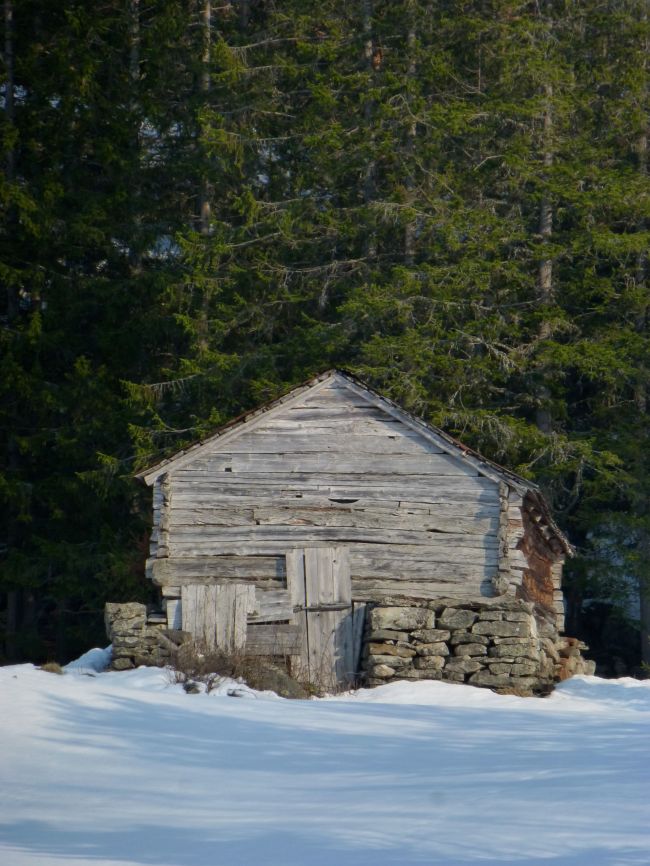 Shortly after leaving the viewpoint, we chanced upon the charming Aurland Eco-agricultural school (Sogn Jord og Hagebruksskule) where we talked with the horses and laughed at the goats who were grazing on the turf roof of the barn. 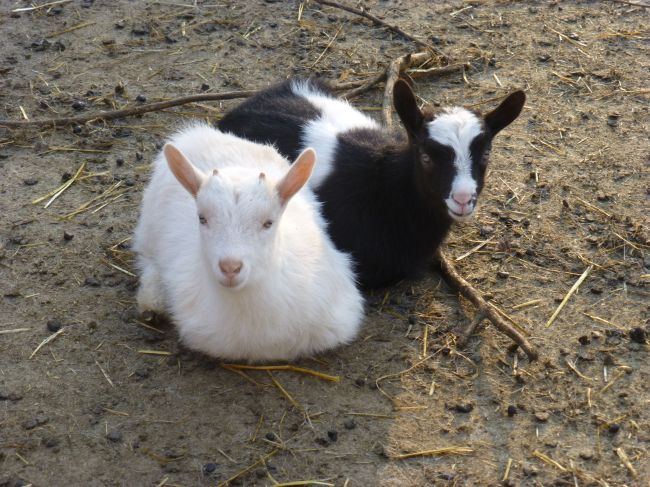 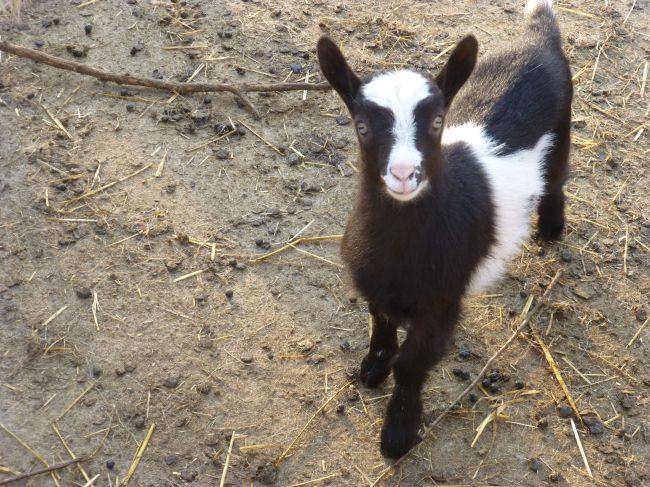 After a long day of stunning scenery and driving through some of Europe’s longest tunnels, we made our way back to Bergen. Happy birthday, Kelly!