This summer, we went to Peru to conduct fieldwork for Milo’s thesis about quinoa farmers and the impact of the growing global demand for quinoa on their lives. Kelly acted as interpreter, translator, and organizer for the trip, which lasted from the beginning of May until the end of July. It was Milo’s first time in South America so Kelly also acted as tour guide, as it was the second time she has been to many of the places we visited. We arrived in Lima and spent the first few days of our trip exploring the capital before traveling throughout southern Peru in search of farmers to answer our questions. 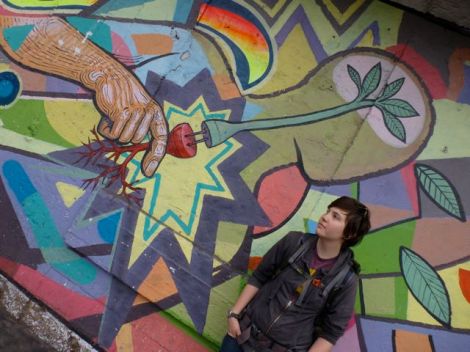 Instantly, we are able to find street art that we can relate to.  Below, Kelly gets her shoes cleaned for the first time along with a lecture of the importance of leather maintenance. 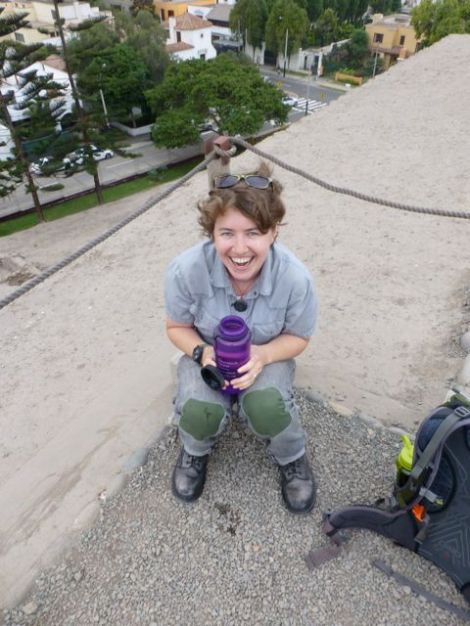 One of our first excursions in Lima was to climb the adobe pyramid, Huaca Pucllana, which was constructed around the year 500. This pyramid is not part of the Inca empire, but was built by an independent people called the Limas. Later, the Limas were conquered by the Waris. Today, the stepped pyramid slouches in sharp juxtaposition against the metropolitan backdrop of the wealthy Miraflores district. Although the adobe bricks are somewhat eroded, the brilliant ‘bookshelf’ construction was designed to ensure that the structure kept standing over millennia of earthquakes and other hazards. 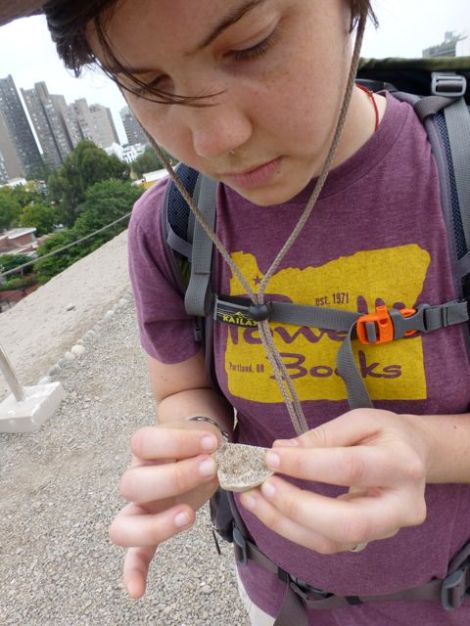 After a few days in Lima, we took a long bus ride to Cuzco. One of the things that Peru is famous for is its bus system, known for its long journeys and the occasional tendency for buses to fall off cliffs. 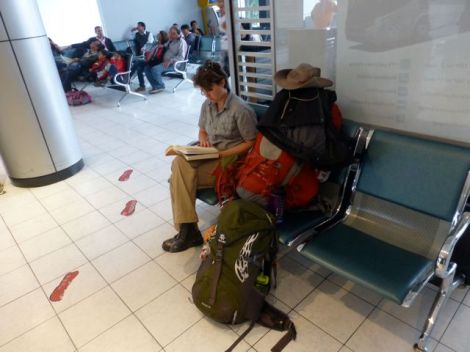 This bus ride was among the more luxurious options available with a seat that extends 170º, free wifi and personal televisions. They still served inedible food and woke us up at 7am with blaring music. Luckily, Kelly has been on many long distance bus rides in S. America so we knew to bring plenty of snacks and earplugs.  We also were able to reserve the front row on the second level, which is the best seat in the moving house!!

We arrived in Cusco mid-day and went directly to Hostal San Juan Masias, a convent and girl’s school that has about 10 rooms to let for temporary visitors to the city. Kelly and her sister, Caitlin, also stayed in this hostel and had such a good experience that Kelly insisted that we stay there. When you travel, especially on the cheap, you quickly come to appreciate the little things that we are so privileged to have, like warm showers with good water pressure and a clean room. Despite being in the middle of the city, the hostel is quiet and cool. It was no surprise that it is still one of the best places to stay on a budget in Cusco.

Our hostel was conveniently located right behind one of the most visited sites in the city, Qurikancha. The monastery was once a beautifully lavish temple with a golden garden with gold statues, animals, and plants, but like most other South American wealth, it was stripped away by the Spanish. 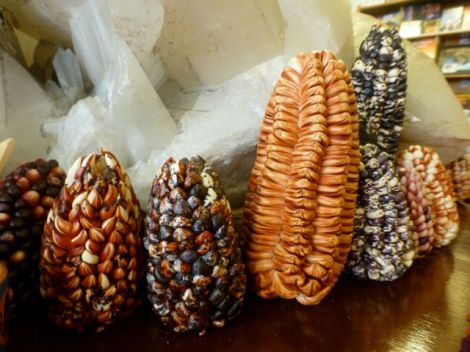 Kelly is checking our Lonely Planet guidebook outside of the Cathedral Basilica of the Assumption of the Virgin, which was completed by the Spanish in 1654 and was built on top of a sacred Inca site, Kiswarkancha. The Inca King, Atahualpa, had just finished a bloody civil war with his brother when he was met with newcomers. Spanish conquistador, Francisco Pizarro Gonzales, whose claim to fame is a bloody one, coerced Atahualpa into the open for what he claimed to be a simple introduction. With only 168 men, Pizarro was able to capture Atahualpa even though over 40,000 Inca soldiers surrounded him. The Spanish held Atahualpa ransom in exchange for goods such as gold and silver, but when they received their payment, the Spanish killed the Inca king anyway, effectively putting an end to the largest pre-Colombian empire of the Americas.

The cathedral that sits on top of the very site in which Atahualpa was captured is shaped like a cross. Here we are at the front of the building and the top of the cross. 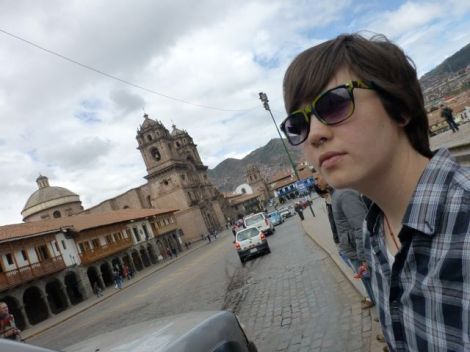 Peru’s rich archaeological history is etched into its terraced hillsides, which are often topped by ruins offering stunning views into the Sacred Valley below. The innumerable ruins of villages and crumbling outlooks are more than enough to spark the curiosity of any adventurer willing to hike the Andes. These sites are so numerous that many of them are incorporated into modern towns and have yet to be protected by any cultural ministries. Although Machu Picchu proudly stands, shrouded in mist and mystery, on the list of the 7 Wonders of the World, there are many lesser-known wonders worthy of mention. One of our favorite spots is called Ollantaytambo, an Inca ceremonial site and town which has some of the oldest continuously occupied dwellings in South America.

Climbing up to the ruins is no small feat at this altitude, which makes reaching the top feel all the more gratifying. It’s always best if you have plenty of time to acclimatize, which we were lucky enough to have.

Over Kelly’s left shoulder is one of the sections of the ruins which are accessible for free. On the opposite side, the main attraction is only accessible to ticketed tourists, so we decided to save our soles (Peruvian currency) and climb up the other side where we could see for free.

We spent hours up in the mountains coming across free and unkept Inca ruins and it felt like our own discovery. Because there are so many, we were able to find a lot unregulated inca ruins during our 3 months in Peru that are off the beaten path, which were some of our favorite memories of Peru.

On the opposite side of town, tourists were lining up to show their tickets and to shuffle through the crowded primary ruins site. Our side, the free side, with ruins just as excellent, was peopled only by us, one other couple and this strange bug. 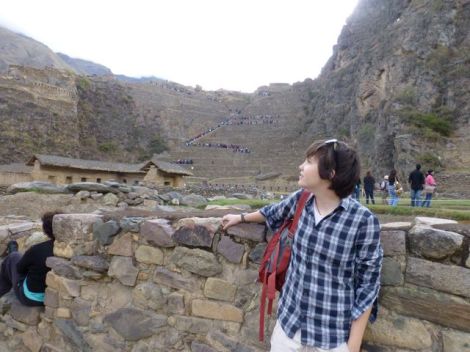 We stood in the entrance line for 5 minutes before realizing that the entrance fee was highly overpriced, so we snuck in through the exit and snapped a quick picture before we were hustled out again.

The town of Ollantaytambo is made up of narrow streets that branch out in a grid from a main square. Like in many of the places we visited, stray dogs were our constant companions. Fortunately for the dogs and for the visitors, many tourist places have volunteer organizations which look after the dogs, so we never saw any sick, dirty, or even poorly behaved pups.

In the main square, we had our choice of a few restaurants all serving similar fare. Typically meat-eating tourists will devour whole cuy (guinea pig) and alpaca steaks, but as vegetarians our options were severely limited. We soon discovered that not only is Peruvian food lacking in diversity, but it is also very bland. The dishes on this table pretty well sum up the extent of the dietary availability and became our daily fare: pizza and quinoa (this plate is by far the most interesting version of this dish that we had). 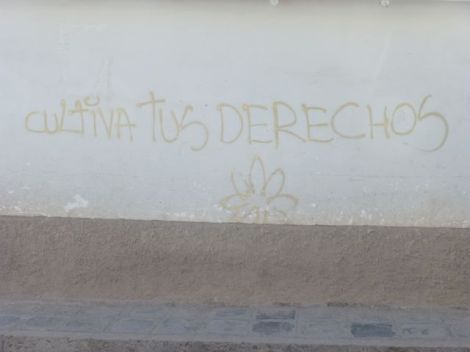 In many parts of the Sacred Valley, motivational messages were scrawled on the walls. This one reads, “cultivate your rights.” The play on the word cultivate is particularly significant in this historically oppressed, agricultural center of the country, especially as quinoa gains global popularity.

Soon after wandering the narrow streets of Ollyantaytambo, we boarded a night train to Machu Picchu town. 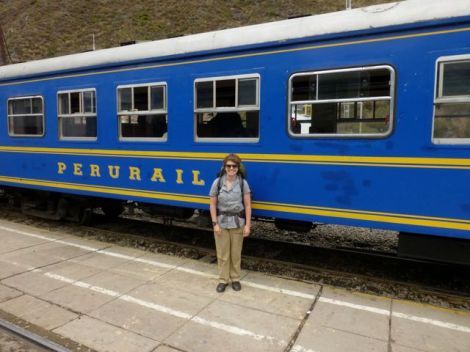